California this week welcomes back motoring enthusiasts from around the world for a series of prestigious automotive events, including the deferred 70th anniversary edition of the renowned Pebble Beach Concours d’Elegance®. First held in 1950, the Concours celebrates exquisite cars from across the generations and their enduring influence on society.

Rolex has supported the event for more than two decades, emphasizing its commitment to the evolution of motoring style and engineering, and the long-term quest for the preservation and promotion of heritage. During this highly anticipated week, the brand also partners the Pebble Beach Tour d’Elegance® presented by Rolex, the Rolex Monterey Motorsports Reunion and The Quail, A Motorsports Gathering. 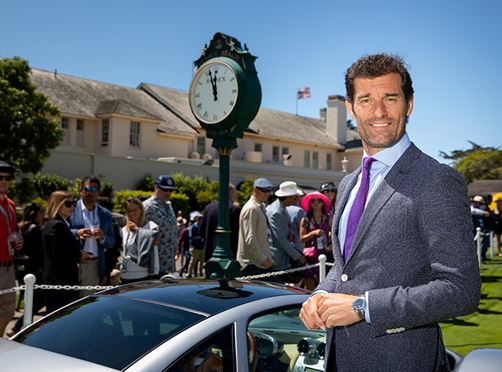 Looking ahead to the automotive celebrations, Rolex Testimonee and multiple Formula 1® race winner Mark Webber says:  “These events are truly wonderful because they honour the heritage of the car and highlight the extraordinary technical and mechanical advancements of the last century.

The 70th anniversary celebrations at Pebble Beach will be unique and very special – the effort, artistry, love and passion put into the vehicles on display will be incredible. Seeing all the cars gathered at Pebble Beach during my visit in 2019, as well as witnessing Rolex’s ongoing support of motoring tradition, is something I will never forget.” 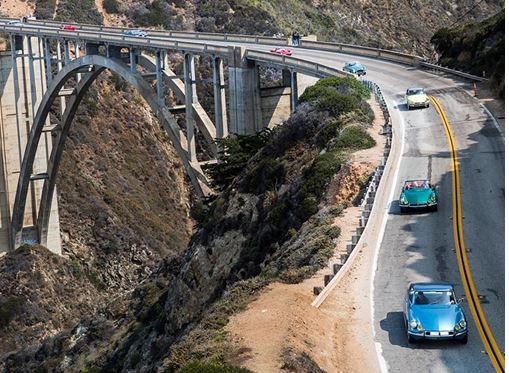 On Thursday 12 August, more than 150 entrants will pay tribute to the original Pebble Beach Road Races, last held in 1956, during the Pebble Beach Tour d’Elegance® presented by Rolex.

This exhibition of beauty in motion will trace sections of the famous 17-Mile Drive, encompassing parts of Carmel Valley and passing along Highway 1 to Big Sur, before circling back towards Pebble Beach to cross the finish line.

The Tour provides aficionados with an opportunity to catch a first glimpse of challengers for Sunday’s Pebble Beach Concours d’Elegance® Best of Show award. 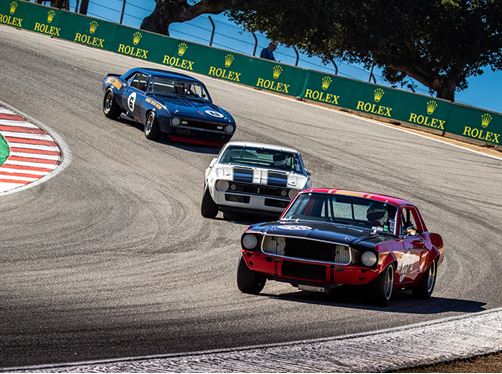 From Thursday 12 to Sunday 15 August, the WeatherTech Raceway Laguna Seca will host hundreds of historic racing cars for the Rolex Monterey Motorsports Reunion.

The period-correct automobiles – from the early 20th century through to the current day – are tested to the limit around the challenging 11-corner circuit, demonstrating the diverse categories and engineering developments of motor sport from one era to the next.

The event continually honours important milestones and in 2021 celebrates 55 years since Ford’s title-winning debut in the Sports Car Club of America’s Trans-Am Series. From 1966, Ford would go on to experience decades of success with the esteemed Mustang in an exciting epoch of racing known as the Pony Car Wars.

During the event’s four days, the open paddock will invite spectators to enjoy the hum of the engines and watch cars of yesteryear race as they were originally built to.

THE QUAIL, A MOTORSPORTS GATHERING

Carmel Valley takes centre stage on Friday 13 August when the past, present and future of the automobile come together for The Quail, A Motorsports Gathering.

Weaving an unparalleled tapestry of automotive history, leading manufacturers will debut new models alongside an exhibition of rare vintage cars. This year, as part of its featured themes, the exclusive garden party will celebrate the 50th anniversaries of two European coupés: the Alfa Romeo Montreal and the Citroën SM.

The event culminates with the Rolex Best of Show car and the individual class winners joining the Rolex Circle of Champions, showcasing the meticulousness and outstanding beauty of these nostalgic vehicles. 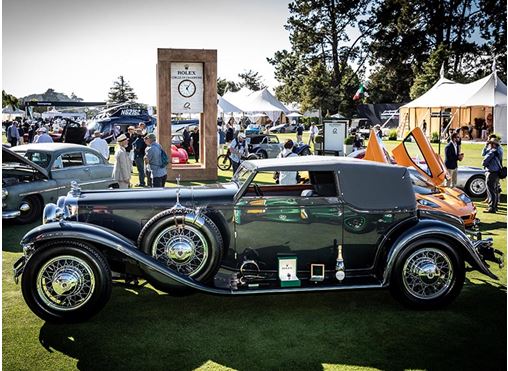 To mark its 70th anniversary, the Pebble Beach Concours d’Elegance® has invited previous Best of Show winners, which will be featured alongside other marques and classes, including Pebble Beach Road Race Winners, Pininfarina, Porsche 917 and Early Electric Vehicles.

Away from the competition, the event will present new concept designs and innovative super cars as part of its commitment to the future. 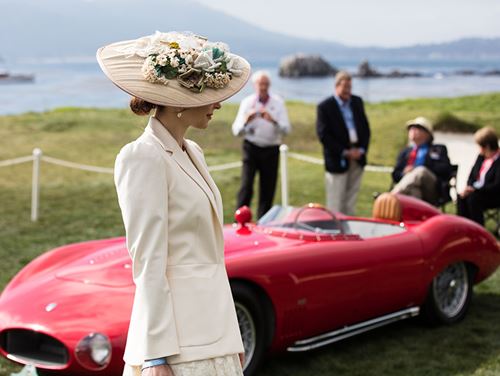 Vying for honours, the entrants will be assessed on their style, technical merit, provenance and history by expert judges throughout the day. The ultimate accolade, the Pebble Beach Concours d’Elegance® Best of Show, is awarded during the closing ceremony and the winning owner presented with a specially engraved Rolex timepiece. Rolex Testimonee and three-time FIA Formula 1® Drivers’ World Champion Sir Jackie Stewart says:

“Pebble Beach is the best concours d’elegance in the world. The spectators witness an exclusive collection of automobiles, some created before they were even born, as well as modern vehicles presented in a very glamorous setting. For Rolex it is a marvellous relationship because passionate car and watch aficionados understand the great privilege of owning something very special, with great history and elegance.”

Rolex’s close ties with motor sport date back to Sir Malcolm Campbell’s World Land Speed Record successes in the 1930s, when he became the first driver to break the 300 mph barrier (483 km/h) at the wheel of his car, Bluebird. Since then, Rolex’s presence in motor racing has grown steadily, its support extending to revered endurance events such as the Rolex 24 At DAYTONA, the 24 Hours of Le Mans and the FIA World Endurance Championship. 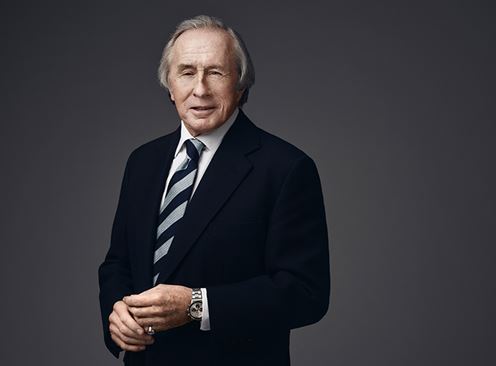 The brand also has a global appreciation for classic automotive events steeped in elegance, beauty and tradition, including the Pebble Beach Concours d’Elegance®, The Quail, A Motorsports Gathering, the Rolex Monterey Motorsports Reunion and the Goodwood Revival.


Acura donating all proceeds from auction to charity, including the Center of Science and Industry (COSI) to support STEAM youth education across the U.S.    First 2022 NSX Type S, VIN #001, to cross the Mecum auction block on Aug. 14, broadcast live on Peacock and NBC Sports Network    In celebrat more >>


Messe Frankfurt India is all set to launch E-Mobility India Forum powered by NGV India Summit on 7th October 2021 at Le Meridien, New Delhi. The forum will invite illustrious EV brand leaders and government dignitaries to address major opportunities and challenges that the country is facing on the path to achieve a complete EV ecosystem.   more >>


Mercedes-Benz at the IAA MOBILITY 2021 – Lead in Electric


Premiere for five fully electric modelsAt the IAA MOBILITY in Munich from 7 to 12 September, Mercedes-Benz is showcasing the full breadth of its current and future electric mobility line-up – from compact models to performance luxury saloon to multi-purpose vehicles (MPVs).
more >>


130th Canton Fair to be held both online and offline


The 130th China Import and Export Fair (Canton Fair) will be held in a merged format, both online and offline, between October 15 and November 3, 2021.


Tickets Now on Sale for the 2021 Chattanooga Motorcar Festival


Concours of Elegance prepares for special tenth anniversary show in 2022


The BMW Group at the IAA MOBILITY 2021 show


Open discussions on the sustainable mobility of the future – in person – IAA takes place at the home of the BMW Group for the first time –  Innovations and new technologies for future mobility – Focus on circular economy, sustainability and urban mobility more >>


The PARIS MOTOR SHOW (MONDIAL DE L’AUTO), and the EQUIP AUTO trade show come together to announce the launching of the Paris Automotive Week in autumn 2022.

The PARIS MOTOR SHOW and the EQUIP AUTO trade show are coming back in 2022. T more >>


Herzog Motorsports to be Honored at Museum of American Speed Oct. 15-16


Cars, Trucks and Memorabilia Showcasing Team’s Success in Off-Road, NASCAR, ASA and NHRA will be on Permanent Display; TV Documentary to air in Fall on Fox NetworkPhoto caption:  On display at the Museum of American Speed will be the Larr more >>


Adrian Newey took the Aston Martin Valkyrie, a head-turning hypercar designed and built in collaboration with Red Bull Advanced Technologies, up the hill at Goodwood Festival of Speed last weekend.


Adrian comments, “It was very more >>


Lotus Emira wows the crowds at Goodwood Festival of Speed

Less than 48 hours after its world premiere, all-new British sports car was a major draw with show-goers    Crowd control measures in place all day on Lotus stand as visitors flock to see the Emira more >>


World premiere for Renault at the 2021 IAA Munich Motor Show


RENAULT ANNOUNCES ITS ATTENDANCE TO THE 2021 IAA MUNICH MOTOR SHOW     RENAULT WILL REVEAL ITS NEW MEGANE E-TECH 100% ELECTRIC FOR A WORLD PREMIERE     THE RENAULT PRESS CONFERENCE WILL BE HELD ON MONDAY, SEPTEMBER 6TH, AND WILL BE LIVE STREAMED     WELCOME TO &lsq more >>


Dacia will attend the 2021 IAA Mobility show in Munich, with a world premiere: its all-new versatile 7-seater family car.      Following the presentation of the brand’s new visual identity on June 17, Dacia w more >>


Getting back to business and back together to discuss Connected Impact at the historic hybrid event The GSMA is celebrating the safe and successful return of MWC Barcelona, the world’s largest mobile ecosystem event. It is humb more >>


Meetings, talks, and Lamborghini models in the heart of Modena, and adrenaline on track with a race at Novi Sad ParkAutomobili Lamborghini renews its participation in the Motor Valley Fest: four days packed with events held in Modena from July 1 to 4 involving th more >>


Electric Avenue- The Road To 2030 at Goodwood Festival of Speed


… with a host of icons already confirmed

•    The Michelin Supercar Paddock will host some of the world’s rarest and fastest super, hyper and race cars at the 2021 Goodw more >>


Goodwood Festival of Speed to go ahead as a pilot event

Automobili Lamborghini will be at the Milan Monza Motor Show from 10 to 13 June, with the exclusive appearance of the new Huracán STO and the few-off Sián, together with the Urus Super SUV and a Huracán EVO Spyder.Automobil more >>


Automechanika Shanghai breaks down China’s 14th Five Year Plan 2021 – 2025 (14th FYP) and what it means to players in the automotive ecosystem. The country’s latest economic and developmental strategy sees the auto industry become a key driver of growth and industrial upgrade.
more >>

A brand-new design by renowned engineer Neville Swales of Building the Legend Limited is set to make its public debut at the London Concours, which returns to the Honourable Artillery Company from 8-10 June. The very first example of this spectacular V12-powered Jaguar E-type homage more >>


Maserati Tipo 61: the 60th anniversary of its triumph at the Nürburgring


An anniversary to remind us that sporting DNA will always be victorious.From racing roots to a new future on the track with MC20.On 28th May, Maserati celebrates a significant anniversary; exactly 60 years ago, the Tipo 61 ach more >>


….from 17 to 18 September 2021.The Hives and Jake Bugg confirmed as first acts. Festival tickets are pre-selling for 55,00 € now. Launched in Berlin in 2015 and initiated by BMW Motorrad, the Pure&Crafted Festival more >>


PEUGEOT is making mobility electric at the Roland-Garros 2021 tournament


As the long-standing official partner of the French Open tennis tournament for the 38th consecutive year, PEUGEOT will be providing transportation for the players, VIPs and officials with a fleet of 100% electric vehicles for the first time in 2021. more >>


The seventh edition of the Chengdu International Trade Fair for Automotive Parts and Aftermarket Services (CAPAS) closed its doors on 22 May 2021 at the Chengdu Century City New International Exhibition and Convention Center. more >>


Various diversity campaigns at international production locations        Audi Board of Management Member for Human Resources Sabine Maassen: “A common understanding of diversity and inclusion makes us fit for the future and ensures our company’s success”        International diversity more >>